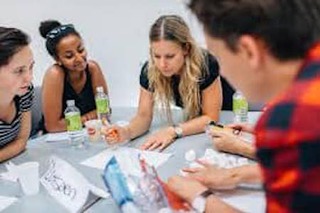 A few years ago, I met with a young boy with a very odd complaint. He had a history of multiple skull surgeries to correct something called craniosynostosis, a condition in which one or more of the sutures of the skull closed too soon. This condition can cause problems with normal brain and skull growth, as the early closure of the sutures is known to cause the pressure inside of the head to increase, which can result injury to the brain as well as other distortions in the head and facial bones.

After his second surgery, which had occurred about two years prior to our meeting, he had begun to experience severe discomfort whenever he was in a noisy room, particularly in rooms with high ceilings and hard floors and walls. He also complained about high pitched sounds being uncomfortable, such as the sound of dental drills and whistles. He was experiencing difficulty with concentration at school and his grades were suffering, but his testing didn't show any significant learning disabilities, despite his medical history of possible brain injury from the disorder.

I was working in a medical practice at the time and had access to some extensive electrophysiological testing equipment, including an Auditory Brainstem Response (ABR) machine. So when I heard about this case, I asked if I could have a few hours to give him a thorough examination. We went through a whole battery of tests including a full hearing test, a measurement of discomfort levels at each pitch, speech in noise measurements, acoustic reflex thresholds, and an ABR test. And what I found was rather interesting. Nearly all of the tests were within normal range. With the exception of one, the acoustic reflex test. In response to loud sounds, this boy's brain responded by causing what's called a "stapedial spasm." The brain PROTECTS the ears by pulling the stapedius muscle, the muscle attached to the smallest of the chain of bones in the middle ear, tight, and that reflex causes the eardrum to stop vibrating. But in this boy's case, it did it violently, jerking his eardrum like a sheet in the wind, and repeatedly, causing him pain from something akin to a Charley Horse in the ear. And what was worse was it did it even at moderate levels, particularly in response to the higher pitches.

I spoke with his physician, who gave me carte blanche to try what was needed, and sent him home over a weekend with a set of hearing aids set to protect him from any sound at a moderate level or louder. (I also bribed him by making sure I chose made-for-iPhone aids he could jack into his iPad for stereo listening.) When I saw him again the following week, I heard he'd had an entire weekend without anxiety from noise-related discomfort and pain. I hate to admit that he cried when he had to give up the aids. I was close to tears, myself, taking them away.

Unfortunately, in the clinic where I worked, despite the physician's approval, I was not allowed to fit this child more permanently. We didn't fit children, and we didn't fit people with so-called "normal hearing."

This case was one of the many situations where I KNEW low-gain amplification could have been useful but where I was powerless to implement it. It was a main reason we created Sound Sense.