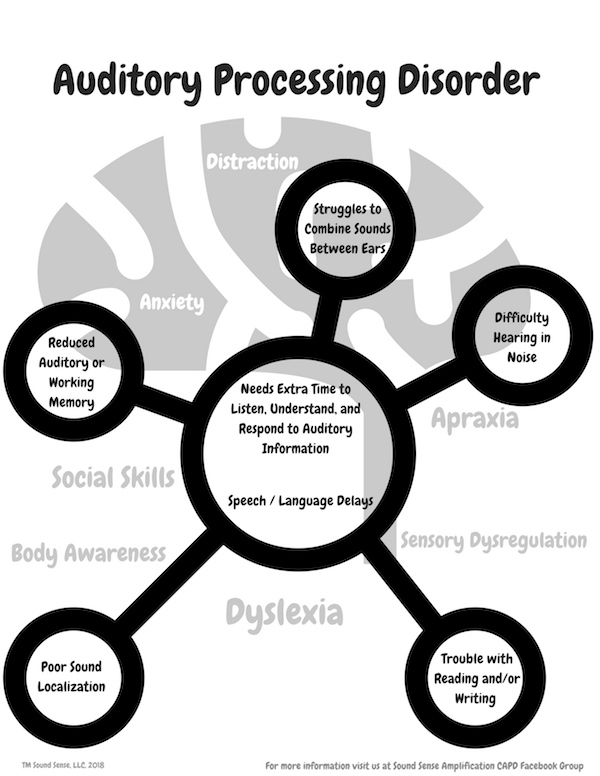 It has been estimated that at least 2-3% of children may have Auditory Processing Disorder (Chermak & Musiak, 1997).  APD is a condition in which individuals struggle to understand what they hear, despite normal or near normal hearing of soft sounds.  APD is sometimes referred to as Central Auditory Processing Disorder (CAPD) due to the brain’s involvement, and is thought to be a possible cause of language-related learning difficulties in children around the world.

Many children with APD present with one ear performing considerably better than the other. This is often known as “amblyaudia” or “lazy ear” or a “right-ear advantage,” a common finding in children with developmental delays or learning differences, as the right ear is better connected to the language area of the brain.

Common Symptoms of APD include:

Other Symptoms of APD

The “Fallout” of APD

The above symptoms are some of the most common primary symptoms of APD. However, these are not an all-inclusive list and it should be noted that they do not take the secondary symptoms into account. It is not uncommon that, in addition to these primary symptoms of APD, these individuals may have considerable difficulties with mood, social skills, and behavior. Children with this disorder are often diagnosed as having multiple challenges, including (but not limited to) Attention Deficit Disorder with or without hyperactivity (ADD-Inattentive Type or ADHD), Sensory Processing Disorder (SPD), Obsessive Compulsive Disorder (OCD), Generalized Anxiety Disorder (GAD), or Autism / Autism Spectrum Disorder (ASD). Dyslexia is likely the most common co-diagnosis with APD. In fact, in a recent study, 94% of children with APD were shown to also have a language and/or reading disorder (Sharma, Purdy & Kelly, 2009).

In considering the multi-faceted nature of APD, it is often quite a challenge to differentiate between problems potentially stemming from APD vs. other causes - and that is a good reason to consider a comprehensive approach in diagnosis. Ideally, children and adults with complex histories require multiple evaluations between cooperating professionals.

Conventional hearing testing, that is testing of the ability to hear soft tones and to understand speech in quiet, cannot be used to identify APD in children or adults. Rather, the diagnosis of APD requires a more extensive battery of evaluations. Generally, these tests include measurements of how well the individual can hear speech in the presence of noise, tests of rapidly presented or degraded speech, the ability to clearly hear and integrate sound coming from both ears simultaneously, auditory memory measurements, as well as other psychoeducational testing including cognitive testing and evaluations of phonological (speech sound) awareness related to reading, writing, and spelling.

APD is thought to arise from a variety of other conditions. The most common are thought to be: (1) a history of ongoing or recurrent otitis media (middle ear infections), a condition which may result in auditory deprivation over time; (2) heredity, as often children with APD have parents with similar difficulties (often presenting as dyslexia); and (3) birth trauma or prenatal factors that may have resulted in developmental delays.